PALMISTRY - do your hands hold your future ?

Yes those lines in my hand are not nerve endings they depict my past ,present and future as says so the book on palmistry. Well if I had known about this I had already consulted a palmist of what career option to take and how to get rich real fast but that is a far away story. So I did some research on the net and found out that more about this pseudoscience, well one of the facts that I got interested in palmistry was that one of my uncles was suffering from a disease that the doctor’s couldn’t diagnose , so her daughter seeing no hope left tried her versions of science to find a cure for her father, and one palmist was so sure that he said there is something wrong with his pancreas, and so it was. Was it a lucky guess or was it his knowledge that helped that palmist, but there lies another case where my friend made print out of hands of dead people and tried to verify from various palmists as to how long they have to live, not even single one of them could identify their death. and there are a hell lot of factors that a palmist need to consider before he tells you future like skin color,mounts, hand type,nails size ..etc. Well is it a good thing to study if you’re getting bored and have nothing else to do

The Basic lines of the Palm are as follows

The Lines of the Palm represent the degree of ease or conflict in a person's life. Few lines can mean few worries, however it may also represent a dull, uninteresting life. As in all things, the key is balance.

•The heart line governs our emotional life.
•The head line governs our intellect and our ability to concentrate and learn.
•The life line demonstrates how you look at your life and your personal control of it.
•The destiny line is often called the dream line because it represents working for a dream or goal.
•There are many minor lines that control other aspects of the personality and will.

In the end I would like to conclude that people make their own destiny , their own choices which govern their lines and how they shape about in the future but luck is what is already built in your hands and so be it.So here goes my hand and it’s million lines which I could mark with a red pen, I know what you’re thinking this guy must be a psycho , well I’ll agree if my hand says so 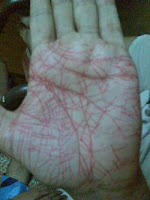 you can even try out this book online , it's quite good

Labels: Life as i know it

Your blog keeps getting better and better! Your older articles are not as good as newer ones you have a lot more creativity and originality now. Keep it up!
And according to this article, I totally agree with your opinion, but only this time! :)

Thank you for the info. It sounds pretty user friendly. I guess I’ll pick one up for fun. thank u